The ability of Indian businesses to change their business strategies in response to the pulls and pressures of the marketplace has never failed to surprise me. From moment to moment. Businesses in India are a flexible lot and standard bearers for the free market.

The truth of this statement is never more apparent than when one goes to a retailer to buy something. Like I did yesterday. To buy an electric box. The one that you instal on a wall and on which you mount the sockets and switches you need. Where the front panel is visible, almost flushed with the wall, while the rest of the box is inside the wall, with all wires and connectors. 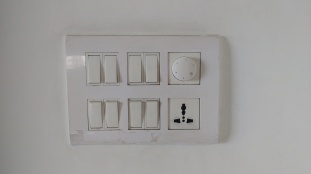 I went looking for electric box made by, let’s call the company Fraser to avoid giving free publicity to the real name, even while some company by the name of Fraser gets free publicity. Fraser suited us as the other electric boxes in the house were of the same make which meant that the look and feel of electric boxes across the house would be similar, and my wife and I had a good opinion on their durability and functionality,  though the reasons for selecting Fraser are not really important in the larger scheme of things, namely this post.

“Fraser does not make electric boxes.” Stunned silence followed the statement from the salesperson at the first shop we enquired. My mind went blank and my eyes glassed over. Images of electric boxes around the house, embossed with the name Fraser, flashed in front of me. Had I unwittingly become a participant in a grand contraband operation of an epic scale lasting decades, considering at least twenty such boxes in our house were labelled as Fraser, and bought from different stores at different points of time?

“Any more,” the salesperson added, to soften the blow, perhaps moved by the shock, if not awe, on my face, and fearing he might have triggered a heart attack.

“But how is that possible?” I argued feebly, the foundation of my existence shaken by the opening comment, since I had bought the last one just three months back.

“I am telling you.” As a clincher in a series of objective, reasoned arguments, this one has few parallels in Indian retailing. Or Indian anything for that matter.

The pride of place, though, in the world of objective, rational, reasonable statements, in the world of Indian retailing, is taken by the magnanimous, sweeping statement that dates back to the time when one had to get a physical warranty card issued while purchasing a covered item, typically an electrical or electronic appliance or gadget. “Ajee hum baithe hain naa” that translates to “Hey, we are sitting here”, with a grand wave of the hand dismissing you the customer’s request for a warranty card as meaningless and cheap since ‘they were sitting there’. With a sheepish grin at having missed such an obvious point, I would walk out, since ‘they were sitting there’, without the warranty card.

I miss those days. Of walking out of a retail outlet with an expensive electronic item, and without the warranty card since ‘they were sitting there’. Of going back for repairs if needed and being asked to pay for the repair since I did not bring the warranty card that I did not have since ‘they were sitting there’ and the ‘they’ did not recognise me any more. We look upon digitisation and globalisation as a solution for all our problems. Rarely do we stop and think about what we are losing as a result. Experts opine that diversity in languages is fast disappearing as a result of globalisation.  I claim first-hand experience of the same. “Ajee hum baithe hain naa” is one phrase that has been lost to the world. Globalisation is to blame.

A close second was “ajee hum kahan jaa rahe hain?” that translates to “where do you think we are going?” Another objective, rational response to the customer’s, “Can you please give me the warranty card for the TV I have purchased?” This has been known to be used by retailers when the situation was such that a mere “Ajee hum baithe hain naa” could not do justice.

Back to the electric box.

I reeled under the impact of the news and clutched the counter for support. But rational and objective people like me don’t give in easily. There had to be a logical explanation. I gathered myself and walked out of the shop along with my wife, in search of it. The logical explanation, as well as the Fraser electric box.

“Fraser does not make electrical equipment,” boomed the shopkeeper’s voice in the next shop as I went about asking for my favourite electric box brand. “They never have,” he said in a tone of finality, much like judges of yore breaking the nib of their fountain pen while pronouncing a death sentence.

I reeled again and had to sit down on a chair. The change of Fraser’s business strategy all of a sudden was too much to handle. Ten minutes back the strategy of Fraser had changed from making electric boxes to not making them. All of a sudden, and without warning, the strategy had now changed to not making any electrical equipment. That too with retrospective effect. It was not fair.

Perhaps sensing my delicate condition under the impact of this revelation, which was confirmed as fact when the shopkeeper said, “I am telling you,” he quietly said to me, “The best one in the market at this time is Sparta (name changed to avoid giving free publicity to the real name).”

Not sure of anything anymore, I feebly said, “Can I take a look at one?”

He brought it out and cheerily said, “You happen to be in luck. We have just a few pieces left.” I smiled feebly at this turn in my fortunes. I was the desert traveller who, on the verge of collapse from thirst, had found his oasis.

Normally I would have bought just the one piece that I needed. But I drank hungrily from this oasis. I bought several electric boxes from the shop, to quench the thirst that would perhaps never even arise. I thanked him profusely for coming to my rescue. Who says the milk of human kindness has dried up?