An Interview with Jacqui Murray

Presenting an interview with Jacqui Murray, long-time e-friend, prolific author, teacher and much more, as she gets ready to launch “Against All Odds,” Book 3 in the Crossroads series of the Man vs. Nature series, as Xhosa’s extraordinary prehistoric saga concludes, filled with hardship, courage, survival, and family. 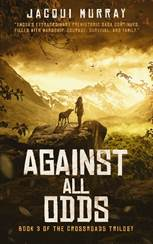 This comes close on the heels of “The Quest for Home,” the second book in the trilogy, which was launched in September last year.

Jacqui Murray is the author of the popular Building a Midshipman, the story of her daughter’s journey from high school to United States Naval Academy, the Rowe-Delamagente thrillers, and the Man vs. Nature saga. She is also adjunct professor of technology in education, blog webmaster, an Amazon Vine Voice,  a columnist for  NEA Today, and a freelance journalist on tech ed topics. Look for her next prehistoric fiction, Laws of Nature, Book 2 in the Dawn of Humanity trilogy, Winter 2021.

Thank you Jacqui for finding the time during a period of intense activity as you get ready to launch your new book. I am curious to know more about it.

It’s great to be with you today, Ankur, on your amazing blog. I always enjoy your dry sense of humor on topics everyone around the world can relate to. I’ll do my best to answer your questions.

Does your chosen genre, prehistoric thrillers, make it easier or more difficult to create the atmosphere in the story? After all, people don’t really know what it was like then. But equally, neither do you. Not even Google perhaps.

As you say, little is known about time before man kept records. To build a world that readers believe in, want to travel in, I must rely on ‘paleo’ subjects like paleoclimatology, paleogeology, paleoanthropology that look at what nature has preserved for us. We know some about the climate back then from ocean coring that reveals the world thousands and millions of years in the past. We know something about life by analyzing remnants of teeth and bones, their placement and what surrounded them. But it is complicated. I researched as much as I could (each book includes a bibliography of my sources so readers can find out more on varied subjects) and then logically extrapolated what that ancient world would have been like. My job was to create a picture that prehistoric fiction readers could lose themselves in and that armchair paleoanthropologists wouldn’t snicker over. This is one of the reasons the first few books took so long to write!

Relentless pace. Book 2 in September last year. Book 3 in September this year. The Rowe-Delamagente thrillers just before that, Building a Midshipman somewhere in between, Dawn of Humanity trilogy in the works. That is an awesome level of creativity and output. How do you motivate yourself to write and write and write?

The simple answer is, it’s what I do, for about 12 hours a day. It used to be a hobby and now it’s my favorite pastime. I love the research, the outlining, the editing, the mixing it up with other Indie authors, the countless online conversations with fellow writers. My characters romp through my head and give me ideas. They even wake me at night to tell me what they’re going to do next. It might sound annoying but I love it.

When you started this series, have elements of the story changed from the original plan till the time you published the third book. Based on later discoveries? Based on feedback from the first book? If yes, how and why.

That’s a resounding yes. I’ll give you two examples. The trilogy I just completed—Crossroads—was originally a long book I broke into two. I planned to end the second book in a place where early research told me they could exist. But when I scratched just a little bit below the surface of that location (to wrap up the final chapters), I found it was nothing like what I expected. That made Book 3, Against All Odds, easy (and gave me its title).

Another epiphany: I originally was simply writing prehistoric fiction, about man’s evolution. Just recently, I realized that my subconscious was selecting seminal times in man’s evolution where we would either prevail or disappear. The first trilogy—Dawn of Humanity—is set in the time when man first differentiated himself from his cousins, the apes. The second trilogy, Crossroads, digs into how and why man developed so many of the skills that allowed him to prevail in his dangerous world—like sophisticated tools, clothing, fire, a bias for action, balancing ‘instinct’ with ‘thoughtful decision’.  The next trilogy will be that time 70,000 years ago when man almost became extinct. I am really excited to figure that one out! I mean, why didn’t we disappear?

What next Jacqui? This series is wrapped up. What can your readers expect from you next?

I need to finish the Dawn of Humanity trilogy. There are amazing evolutionary events going on in South Africa 1.8 million years ago that Book 1, Born in a Treacherous Time, didn’t have a chance to touch on. I’m outlining it this month and loving what I see. Then I’ll either do the second trilogy of Crossroads (spoiler: I left Book 3 on a cliffhanger) or go to that time 70,000 years ago when modern man almost went extinct. That’s pretty intriguing, isn’t it? I’d love if your readers would tell me what they’d like to read next, in the comments.

In conclusion, what would be your suggestions to budding, aspiring and struggling writers?

Keep writing. Don’t quit after one book—write at least three. Talk with other Indie authors—build your network. And finally, write what you love.

Thank you, Jacqui. I wish you success with this book, equalling and exceeding that of your previous books. I look forward to reading it soon.

A million years of evolution made Xhosa tough but was it enough? She and her People finally reach their destination—a glorious land of tall grasses, few predators, and an abundance that seems limitless, but an enemy greater than any they have met so far threatens to end their dreams. If Xhosa can’t stop this one, she and her People must again flee.

The Crossroads trilogy is set 850,000 years ago, a time in prehistory when man populated most of Eurasia. He was a violent species, fully capable of addressing the many hardships that threatened his survival except for one: future man, a smarter version of himself, one destined to obliterate all those who came before.

From prehistoric fiction author Jacqui Murray comes the unforgettable saga of a courageous woman who questions assumptions, searches for truth, and does what she must despite daunting opposition. Read the final chapter of her search for freedom, safety, and a new home. 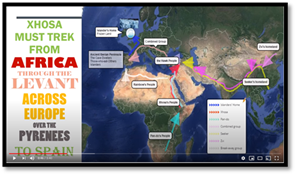 (click on image above to play the book trailer video)

Where is the Book available

53 thoughts on “An Interview with Jacqui Murray”