Just when they (the public) felt they could sit back and let political leaders pay some dividend on the investment by making a fool of themselves by making needless, irrational decisions that are likely to be scoffed at by all sections of society and may soon need to be reversed, the rug has rudely been pulled from under their feet.

Throwing caution to the winds, the Supreme Court has decided to take upon itself the mantle of making needless, irrational decisions that are likely to be scoffed at by all sections of society and may soon need to be reversed.

Political leaders are running scared. Never before has there been such an open challenge to their rights. This move of the Supreme Court strikes at their belief system and the core of their existence. Most of them have beaten a hasty path back to their constituencies to convince voters that they will continue to disappoint them with their unfulfilled promises and irrational decisions. The Supreme Court decision should be seen merely as a one-off, an aberration.

In a bold decision that appears to be in response to a petition from no part of society, the Supreme Court has decided that there should be no liquor vends within 500 metres of any national highway. This, apparently, was the missing piece of the jigsaw that will bring down accidents on national highways. Conducting driving tests and antecedent verification before issuance of licences was considered as an alternative solution but, since it appeared to hold promise of solving the problem, it eventually went where such alternatives need to go; the reject pile. Existing liquor vends should be moved a minimum distance of 500 metres from the highways. Moreover, since many of the existing vends appear to have been created after taking due approvals from authorities, they will need to be shifted overnight.

When the going gets tough, the tough get going, they say.

Pubs and restaurants falling within the 500 metre zone have, “under the influence” of the order, also moved to shift their entrance gates to beyond the 500 metre line. It is common knowledge based upon detailed studies of human behaviour that once you have moved (or have been moved by someone) a distance of 500 metres after consumption of liquor, the inebriation vanishes and you become, strangely enough, “sober as a judge”.

Hotel Management schools across the country have introduced a new course on teaching students the metric measurement system. Especially for the purpose of measuring a distance of 500 metres. The humble metric measure is enjoying a revival amongst bar owners who have only known the inches to be poured down a glass. Catering students are being taught the difference between national highways and tiny local roads and how to identify each.

The sagacity of the decision can be judged from the fact that India remains one of the most densely populated large nations in the world with, among nations with 100 million plus populations, neighbouring Bangladesh being the only one more densely packed, leaving enough space to move anything upto 500 mm (millimetres; 1 metre = 1000 millimetres) in any direction. Hence, moving a vend 500 metres away can be considered a wise and reasonable decisions, taking liquor vends only closer to  schools, homes, religious places, etc. And we know our children and people not barrelling down national highways are mature enough to resist the lure of the drink. In fact, liquor vends can be setup at a distance of 100 metres from schools. QED.

In a strange coincidence, the day this order was announced, a small outlet started coming up close to our building, at a point visible from our terrace. Yesterday the signboards have been put-up. And, lo and behold, we now have a liquor vend right next to our building! But I exaggerate. It is not right next to our building. It is about 100 metres away. From the place in the compound where youngsters play football, a good kick could land the ball, and some chasing youngsters, into the vend. But so what? Are they grown-ups travelling down national highways who will be lured by liquor and cause damage to themselves and others? 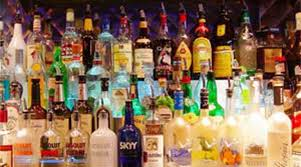 It is mainly drivers of vehicles on the national highways that we worry about. Drivers who we have chosen to give licences to drive motorised vehicles ranging from two-wheelers to twenty ton trucks. How can we trust them to resist the lure of liquor.

But the paying public is not happy. They have paid so much money to see politicians make of fool of themselves. They cannot countenance the Supreme Court denying them their fundamental rights.

The Supreme Court, cut to the quick by the spontaneous censure from all over the country, is trying to limit the damage.

They have clarified that liquor is good because it generates a huge amount of revenue for the government. Our fight is not against liquor. Do you not see the rapid expansion of liquor vends near schools, houses and religious places, at least in modern cities like Gurgaon? If we have our way, no citizen of the country will need to travel more than 100 metres in any direction to reach a liquor vend.

But liquor drinking is bad. Our fight is only against drinking liquor. That too by mature adults who have been adjudged fit to be issued driving licences. That is why liquor advertising is banned on all media. We will soon issue orders to ensure that the government introduces a tax to uniformly collect liquor revenue from each citizen so that the state can continue to finance its charitable activities and development agenda, without anyone ever needing to consume it.

Stopping his motorcade by the side of the road and hurriedly stepping out to ease himself, per established cultural traditions of the country, the Minister for Tourism has stated in Goa that Pub culture will not be tolerated in the state and the government will only support trends that fit into the Indian culture.

Relieved at having watered the wall of a private home under a sign saying “This is not a urinal”, he got back into the car and his motorcade passed through the crowded thoroughfare with well-fed, well-armed security guards hanging out of the minister’s car, at state expense, threatening the common man on the street, as per our rich culture, to get them to move out of the important minister’s way.

He was a self-avowed culture buff and never let pass an opportunity for practicing it in real life. Such was his dedication to the cause.

Afraid of his efforts at protecting the nation’s culture being misconstrued, he made it a point to clarify to the media that our culture requires us to drink in private so that we can proudly proclaim we don’t drink. “If we drink in pubs how would we be able to hold ourselves up as role models to the young?” he queried a media left dumbstruck by the simplicity of his logic. “Do you have any idea how many young people this country has? Who will the youth look up to? Our country will be bereft of leadership and vision. Drinking in private, away from the eyes of the world, also allows us the liberty of abusing our near and dear ones, both mentally and physically. It is an onerous responsibility shouldered almost exclusively by males in this country, such is our culture”, he said, puffing out his chest, to express solidarity will suffering fellow-males, tortured by the responsibility of upholding cultural traditions of the country.

“Moreover, drinking in pubs brings upon drinking adults the responsibility to behave, well, for want of a better word, responsibly, in public. Responsible behaviour has never been a part of our culture. When we have bigger problems to solve, like changing the education system of the country without any reason, deciding whether people living in the country should be called Indians or Hindus because people living in Germany are called Germans, and many others, why needlessly open up another front and ask the already suffering males to start behaving responsibly?”

One could feel the powerful logic seeping down into the consciousness of the gathered media representatives. One could almost sense mental notes being made by people in the room, especially those given to drinking in pubs, to henceforth only drink in private, to honour and uphold tradition. The minister moved in for the kill.

“In any case, even where, because of cultural traditions, liquor is banned totally, as it is in some states, our culture enables us to bribe officials and create a supply situation that states which don’t ban liquor would be proud of. How do you think this is possible?”

“Because of our rich culture” the media responded in unison.

“How do you think government officials responsible for enforcement of laws are able to make end meet on their meagre government salaries?”

He had made his point. The last question was rhetorical. The gathered media personnel filed out of the room with their heads hung in shame.

The Minister’s bold initiative of restoring cultural traditions has, predictably, created a powerful multiplier effect throughout the country.

The armed forces, always alert for opportunities to improve their capability and preparedness to handle exigent situations, have started training in the use of culturally superior weapons like bows and arrows and maces, with which our ancestors fought invaders valiantly and lost repeatedly. Soldiers are being trained on new techniques of reverentially touching the arrow to their forehead, with eyes closed, to invoke divine powers, which will convert the arrow into a nuclear missile, and launch it in slow motion, for maximum destruction. TV serials are testimony to the destructive power of these weapons.

Multinational corporations, always on the lookout for local traditions in the markets they operate in that they can cater to without doing anything, especially ones that allow them to not spend any money, have started raising Purchase Orders for bullock carts for transporting their senior employees. Some have gone a step further and suspended their email services. Pigeons are being brought back for communication between offices in different locations. Experienced people say this is only the tip of the iceberg. They expect a total revolution in the way business is done in the country.

Meanwhile, the Minister, after the meeting, checked the time on his Swiss-made watch, stepped into his car, made by a Japanese company, wearing clothes made of Egyptian cotton, sporting an Italian designer label, with his retinue of guards carrying Russian automatic weapons, and reached home to recline in his favourite chair, made by a Swedish furniture-maker, open his bottle of whiskey made in Scotland, mix some of the whisky with blackish sugar-water made in the US, and quaff it down in a glass made in Belgium.

He soon fell asleep. Tomorrow was going to be another busy day. Lots still to be done to protect the rich culture.